Although the exact causes and risk factors of multiple sclerosis are still unknown to modern medical science, it is believed that the disease occurs on the premises of inherited genetic dysfunctions and is triggered by certain environmental factors (either exposure to chemicals or infections with viruses or bacteria). Despite the fact that medical scientists have conducted elaborate research on multiple sclerosis over the last few years, the exact genes that render people more susceptible to developing the autoimmune disorder and the exact environmental causative agents haven’t been identified yet. Medical scientists hope that in the near future they will be able not only to discover the exact causes of multiple sclerosis, but also find efficient means of preventing the occurrence of the disorder in persons with predisposition to autoimmune disorders. 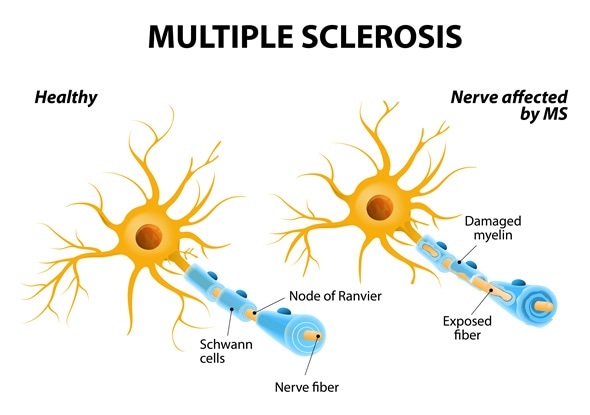 The infectious organisms that are suspected to play a role in the occurrence and progression of multiple sclerosis are herpesviruses and Chlamydia pneumoniae bacteria. The HHV-6 subtype of herpesvirus (virus that causes roseola in children) has also been identified to cause severe diseases of the nervous system such as encephalitis (brain inflammation). Other subtypes of herpesviruses such as herpes simplex 1 and 2, varicella-zoster virus and cytomegalovirus also have potential of causing dysfunctions of the nervous system. Chlamydia pneumoniae, an atypical bacterium that has been linked with various inflammatory diseases is also suspected to cause multiple sclerosis. Although medical research continues, signs of infection with Chlamydia pneumoniae have been revealed in the majority of patients with multiple sclerosis.